Where the Mountains Meet the Sea

Where the Mountains Meet the Sea 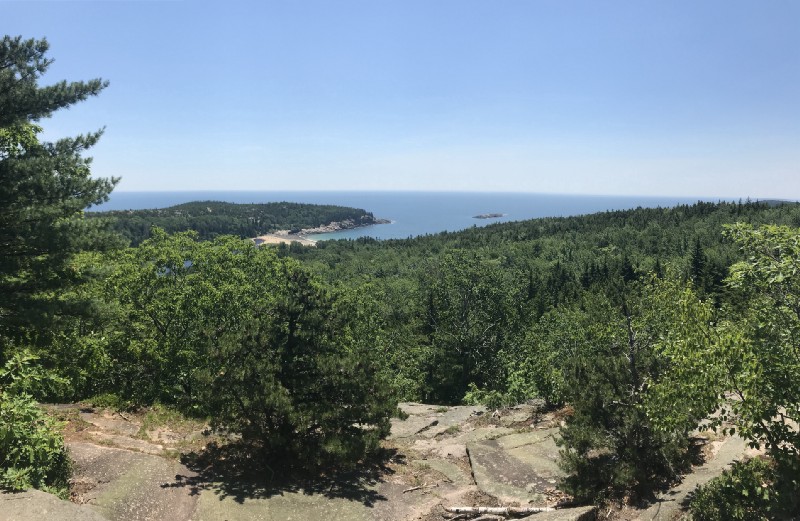 Holiday vacations never used to be my thing. Whenever long weekends like Memorial Day, Independence Day, Labor Day, etc. came around, I was typically bucketed in the “Not quite sure what I’m doing yet” group whenever someone asked me what my plans were.

When it comes to those long weekends, there are usually two types of people— The people who planned trips in advance to take advantage of the time off and the people who are just plain excited to have an extra day off of work.

This year, to my surprise, I was in the former group. I had pre-planned a trip with my boyfriend to camp in Acadia National Park, located off the coast of Maine.

Growing up, my parents didn’t take me on too many big trips. I developed a passion for traveling, hiking, and camping a little later on in life. It wasn’t until age twenty when I was first exposed to a breathtaking view of the Rocky Mountains in Colorado. After that, I was officially convinced that the West was a much more beautiful place to be.

Being born and raised in New Jersey, I wasn’t acclimated to seeing such tall mountains. I had never visited the four corner states, but once I did, I strongly felt that it was the most beautiful part of the country.

In a matter of only three years, I made countless trips to Colorado, Arizona, and Utah. The reason being — I was fortunate enough to have people to visit out there during that time frame. Sadly, it wasn’t long until they all left.

So, I figured that it was about time to stay local and start exploring my home base. I wanted to give the East Coast a chance to prove its beauty (Plus, it would save me the pricey plane ticket expenses).

We didn’t plan this quite far enough in advance, so all of the public campgrounds were already reserved. Instead, we reserved a spot at one of the private campgrounds that was recommended within the “Camping” sectionof the Acadia National Park website.

We stayed at Smuggler’s Den Campground, located in Southwest Harbor, just outside of Bar Harbor. We weren’t exactly “roughing it”, but it was a great spot to be.

The staff was very friendly and the campgrounds were was very accommodating, with running water, bathrooms with showers, and electricity — if that’s the type of campground you are looking for.

With tremendous thanks to the Island Explorer shuttle bus, we were able to get to any part of the park without ever moving our car. The best perk of the shuttle bus is that it’s free— And you’re being environmentally sound by doing ride-share.

My favorite part of utilizing public transportation was getting to meet and talk to other people, especially the locals. Some of the best tips that we received came from the Maine locals who frequently visited the park and knew exactly where to go and where to avoid the major tourist areas.

Lo and behold, here is a breakdown of the trip —

Echo Lake — Maybe it was because of the holiday, but this was a bit of a bust. Not because it wasn’t beautiful to look at, but because this area was more family-oriented. For me and my boyfriend, we were hoping to be somewhere more remote.

We quickly dodged this after seeing how crowded it was. Instead, we took a bit of a detour and hiked a nearby trail.

Beech Mountain (Beach Mountain Trail) — An unexpectedly fun hike, this was exactly the warm-up we needed for the next few days. Filled with steel ladders and a few stints of uphill climbs, it was a short and sweet trail that allowed us to get a feel for the park.

Beehive Trail — This trail was recommended to me by a friend, so I made it a point to make sure that we hiked this one.

It was a challenging hike which was also filled with stints of uphill climb and iron rungs to ensure extra grip. Once at the top, we had a remarkable view of Sand Beach, another more touristy shore area filled with families.

The Bowl — This was one of the tips that we received from a local while on the shuttle bus. The Bowl is located where Beehive trail meets the other trails. It’s a smaller lake area that you are able to swim in and it’s a little less crowded, so you can get a bit more privacy.

Ocean Path — As a cool-down from the Beehive trail, we decided to take the Ocean Path to Otter Cliffs (This did not disappoint). It was a scenic, leisurely trek along the coast with multiple places to stop and take in a view of the ocean (Note: If you stop earlier on, you’ll avoid the crowds towards the end, approaching Otter Cliffs).

Otter Cliffs — This was another viewpoint that we were recommended to see. As you reach the end of the Ocean Path, you are able to sit and look out at the shore to see how far you’ve traveled from Beehive Trail and Sand Beach. Another beautiful sight full of ocean views. 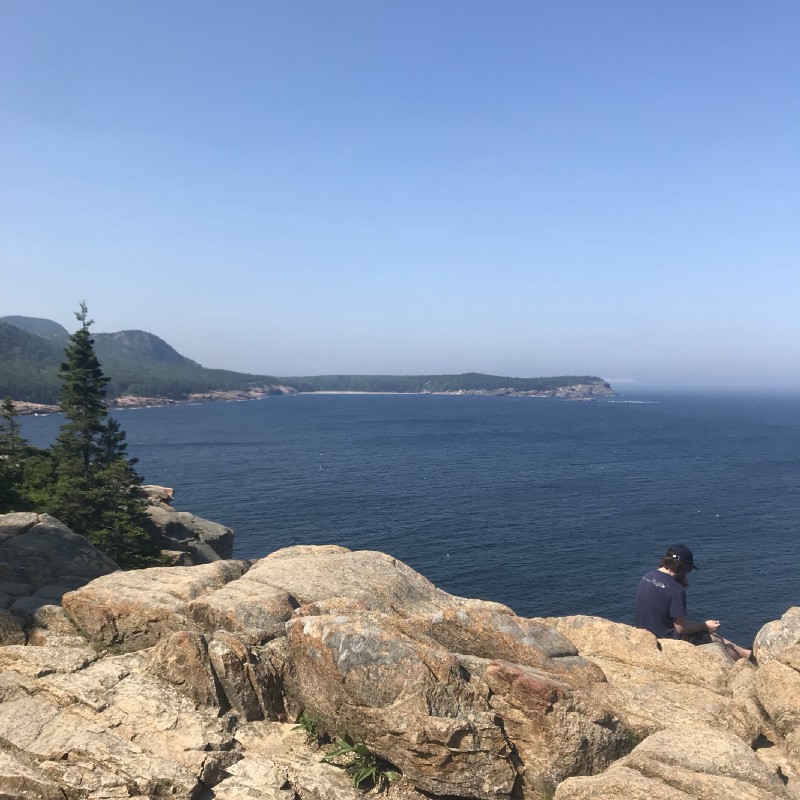 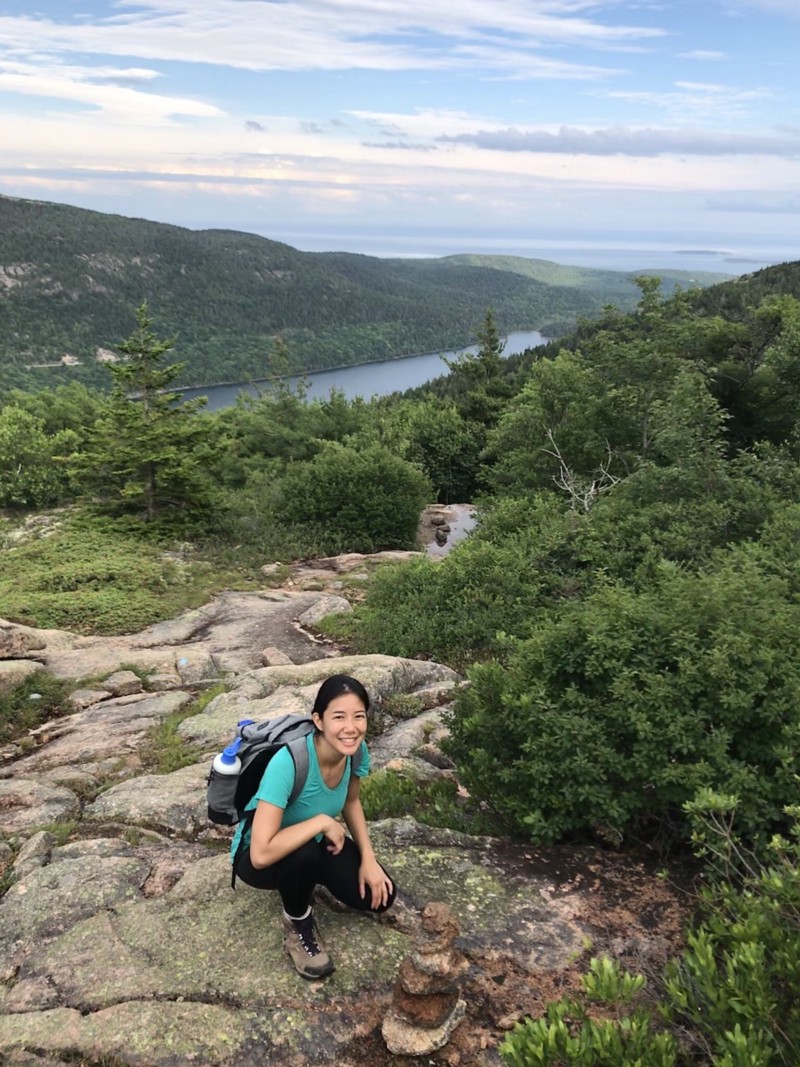 Jordan Pond — A lakeside view with a relatively easy trail that winds around the perimeter of the lake, Jordan Pond is another popular destination. And don’t be fooled by the lake alone, there are more trails beyond this. At the halfway point, you’ll see signs for additional trails leading up the mountain.

It was an extremely challenging hike and not for the faint of heart. Despite thinking that I was in great physical shape, I was still breathing heavy, but the climb was absolutely worth it.

Sargent Mountain is the second tallest mountain in Acadia, just a few hundred feet shy of the tallest mountain, Cadillac Mountain. Though it isn’t the tallest, it sure felt like it. And again, it was another less crowded hike where we were able to truly take in the views while avoiding the crowd. 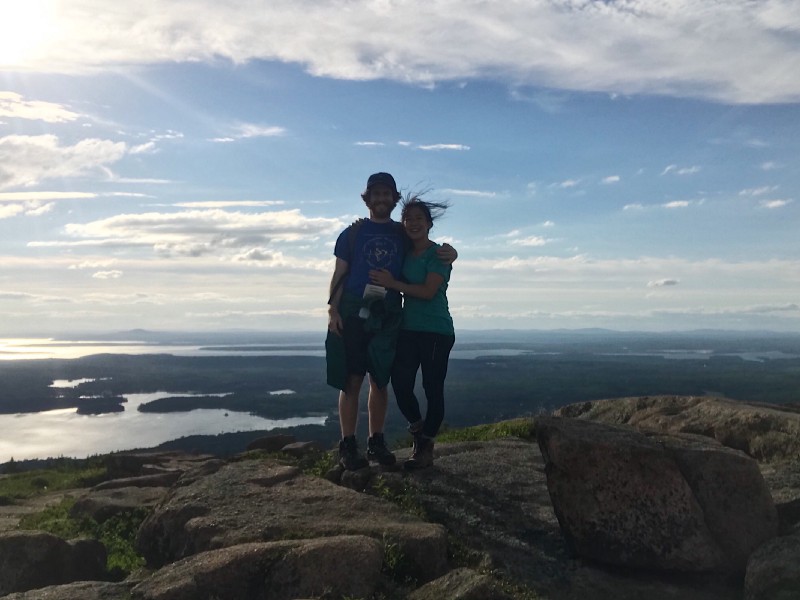 Sargent Pond — A small body of water located just a few climbs down from the summit of Sargent Mountain, this was a hidden gem which was also given to us as a tip from a local. 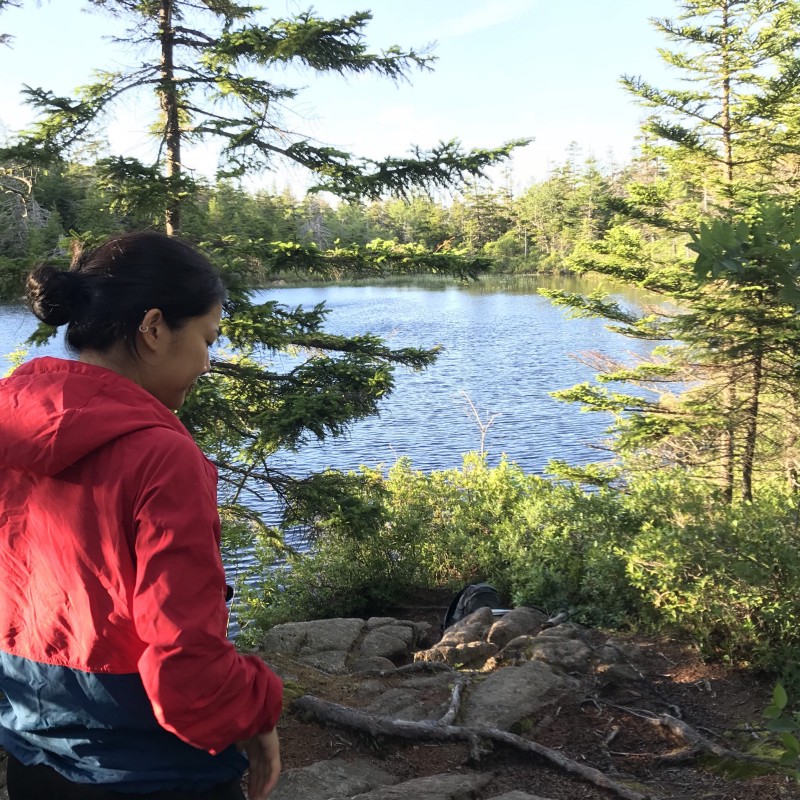 I have to put this on the list though because if it weren’t for attempting this hike, we would have been on time for catching the last shuttle bus from Jordan Pond to Village Green, where we needed to be in order to get back to our campground.

We missed the last free shuttle bus from Jordan Pond to Village green by a mere five minutes. (Another note: The shuttle bus drivers are extremely punctual, so don’t be late! They won’t wait for you!)

Ironically enough, Portland, Oregon has been a top city on my list to visit. I had even signed up for the Portland Marathon to truly experience the city, but to my disappointment, the marathon was cancelled, therefore the trip as well. Little did I know I’d still get to visit Portland this year, only on a different coast.

Bike Rentals — We rented bikes once we got to Portland so that we could give ourselves a break from walking and explore the town on wheels. The place we rented our bikes gave us a bike route map and brewery map which made for the best tour of the city.

Bissell Brothers Brewery —We somehow managed to sneak in a beer with only an hour and a half left to return our bikes. Stopping at this local brewery was so much fun and totally worth the ride over. 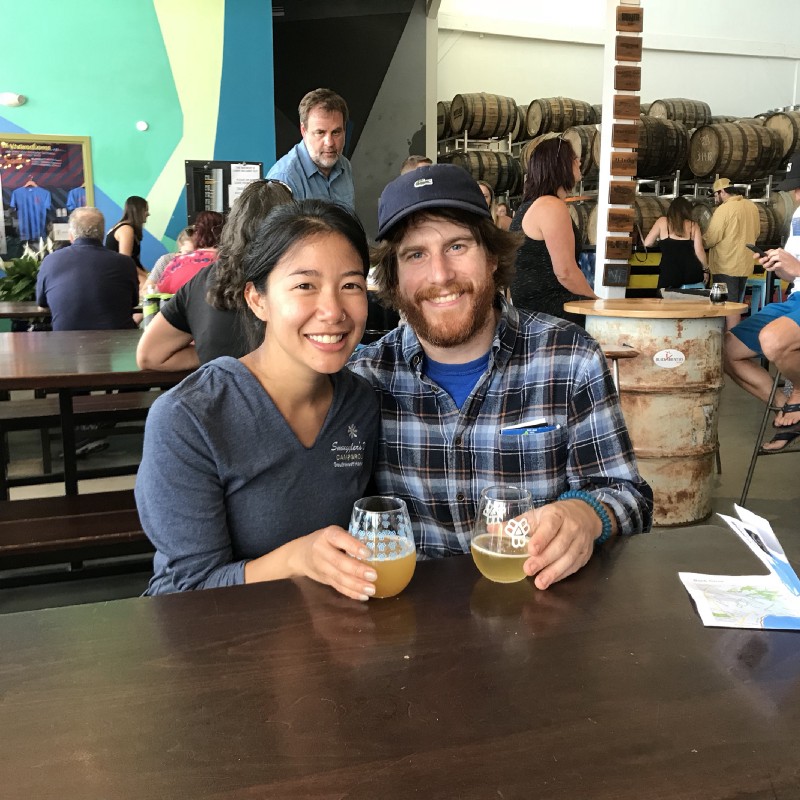 High Roller Lobster Co. — Being our last night in Maine, we couldn’t miss stopping to get lobster rolls in Portland (even though we had already eaten lobster rolls the night before). 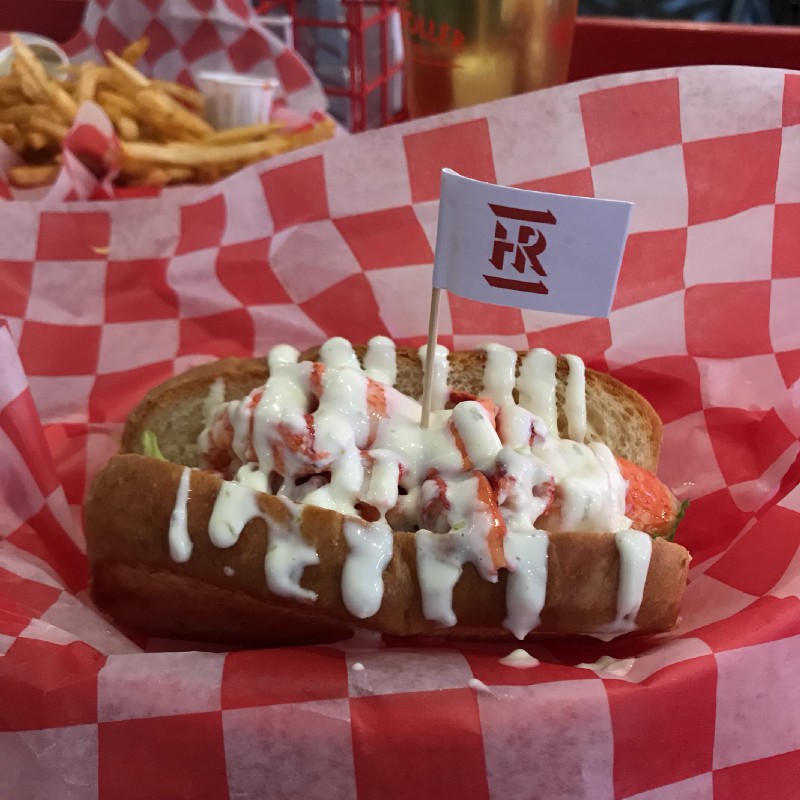 High Roller Lobster Co. was an awesome, funky lobster joint with a great atmosphere and beer on tap. Coincidentally, one of the co-owners happened to be the founder of Bissell Brothers, which is the brewery that we had gone to.

After only a few days in the beautiful state of Maine, I’m now convinced that the West is not the only place you can find beauty in the United States.

I was in complete awe and wonder at the sights that Maine had to offer. And the thing that I absolutely loved most about this gorgeous, lush state is that it’s a place where the mountains meet the sea.

You truly get the best of both worlds.

Writer and Runner, covering topics about career, relationships, and life in general.